The Sunday Telegraph ST Kids Magazine recently published a feature about our experience traveling with children and the choice to change our lifestyle.

Below is the original text by Amy Raphael. 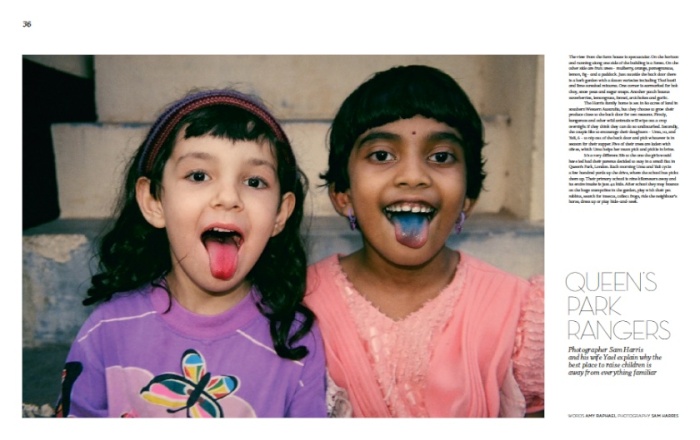 The last time I saw Sam Harris, just under a decade ago, we were in a helicopter buzzing above north London with John Lydon. Harris, squeezed into a corner of the helicopter, was taking photos of a tense and pale Lydon. The former Sex Pistol was not, it turned out, a relaxed passenger. Around the same time, I interviewed Jarvis Cocker in Holland Park. The former Pulp frontman had discovered nature and Sam snapped him lying around on the grass and feeding ducks in a stagnant pond.

Cocker might have considered a central London park to be a perfect place for getting back to nature, but Sam wasn’t so sure. It was the start of a new century and he was talking of travelling to remote places. Still, I had no idea – and neither did he – that he’d end up living deep in a forest in south-west Western Australia. For the last three years Sam, his wife Yael and their two daughters have lived in a solar passive house with a modern composting toilet. They rely on the rain for their water supply. The girls pick fresh vegetables from the garden and live, quite happily, without a television.

The photos Sam now takes are not of eccentric rock stars but of his family and their immediate environment. The digital age allows him to use his laptop as both dark room and office; he can upload images onto his website and share his life with the world from the depths of the forest. Since leaving London, he has slowly and carefully recorded his family’s adventures on film; the everyday images are intimate, loving, funny, fascinating and, best of all, spontaneous.

The unusual aspect of Sam’s growing body of images – that amount to a kind of visual diary – is the amount of time he can now spend capturing family moments. “Kids grow up so quickly. You get used to them being one age and mind frame, you blink and they’ve changed. It sounds clichéd, but you want time to stop for an instant so you can cherish each period of their lives.”

Many dream of escaping the city – but few actually do it and even fewer do it so boldly. Sam says that everything changed when his first daughter, Uma, was born on New Year’s Eve in 1999. He started to question his lifestyle. Should he and Yael bring their child up in a first-floor flat in London? As a successful photographer working for Esquire and Dazed & Confused, he worried about only spending fleeting moments with his child. “Would I spend two hours every Sunday pushing Uma on a swing in the local park? How could that ever be enough?”

He went to Tahiti to take photographs at a tattoo festival and had an epiphany. “There were hippies and freaks everywhere and I thought, ‘I could be here with the family.’ Their non-conformist way of looking at life made me look at my own lifestyle as a parent.” Both Sam and Yael are peripatetic. Sam was brought up in London but has always travelled with work; Yael was brought up on a kibbutz in Israel. They met in Tel-Aviv on a photo shoot through their respective jobs in the music industry – Sam as a photographer, Yael as a record label PR Manager – and travelled briefly to India as a couple.

When Uma was born, Sam and Yael talked and talked: could they uproot themselves, leave behind family and friends and go travelling? And, if they did, would they ever return? At the end of 2001, when Uma was two, they went to India for six weeks to “dip our toes in the water”. Sam was confident about travelling in India, but concerned about doing so with a small child. “India obviously isn’t like a European country in terms of facilities. So we headed to Goa because it’s commercial and easy. But, after a week or two, Goa felt too restrictive. We wanted to go further – let the lead loose.” ’ Yael adds: ‘India is an amazing place for kids because they are sacred. Indians will not harm a child.’

In 2002, after the trip to India gave them confidence to leave London, they bought three one-way tickets to the other side of the world. “We were happy to go wherever fate took us,” says Sam simply. They travelled around India again then, in August 2003, flew to Australia and bought a campervan. Three hours south of Perth they came across the small town of Balingup, with its cosmopolitan mix of 70s hippies and local farmers, and instantly felt as though they’d found their new home. “It sounds crazy,” says Sam, laughing, “but people around here say that you don’t choose Balingup, Balingup chooses you.”

They didn’t make their home in Balingup straight away. Yael, pregnant with their second child, wanted to give birth in a small village in India with which they had fallen in love with on an earlier trip. By this point she had lost what she refers to as her “western mindset” and was fully immersed in Indian culture. Rejecting local hospitals with their “medieval torture rooms”, Yael instead chose a primitive health centre. “There was a power cut and so the emergency lights came on. Sister Priscilla, the midwife, was a jokey nun who had put up a sign saying: ‘Smile, don’t worry, nothing will happen’. Yali was born after a 40 minute labour and I felt so relaxed; you have to change your western mindset and just go with anything and everything.” 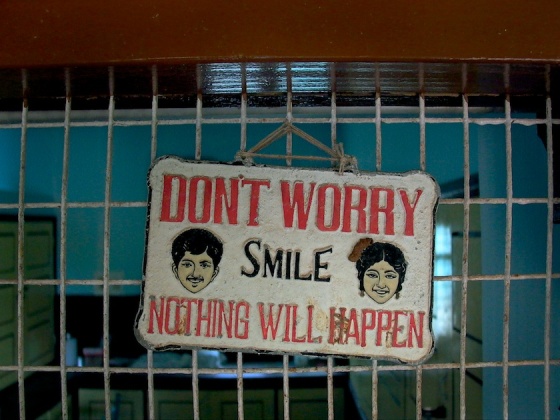 What is striking about Sam and Yael is not their modern hippie attitude to life, but their happiness. They have taken a huge risk by walking away from their old lives, from a familiar lifestyle and secure jobs. They do miss family and friends. Yet they have few regrets. Most of all, they are content about how Uma and Yali are living a basic life with basic needs. Yael says that Uma was stunned to discover running water on a trip to Israel; when the family flew to Australia from India and went to a supermarket for the first time in months, they found themselves staring in disbelief at the endless rows of cereal. “We’ve got a photo of Uma surrounded by all this… stuff. It was a real culture shock.”

Apart from living a life without relatively little ‘stuff’, Uma and Yali, now 6 and 10, are flourishing in a secure family unit with both parents around. They have learned – and it is this of which I am most envious – how to live in the moment. They understand their real needs: a roof over their heads and simple, local food. They go to a school in Balingup with 42 other children and have access to all the individual help they may need. Uma is already excited about high school; there are several half an hour to an hour’s drive away.

Yael says that Uma in particular, having spent so much time in India, is accepting of everyone. “She has seen people who are blind or missing a leg, who live in poverty and who mingle with animals. Both girls respect others unconditionally, which is a really important value to Sam and me.” Most parents in the western world are endlessly consumed by guilt: they don’t see enough of their kids; the time they do spend with them is full of distractions. Sam and Yael were determined to do it differently. Unlike most, they turned their dream into a reality and are now passionate about their new life. “I am not lecturing to anyone,” says Yael, laughing gently. “What we’ve done isn’t for everyone. All I can say is that if you let yourself do this big switch in your head, you’ll gain so much more out of an experience like this.”